Grand children on the cover 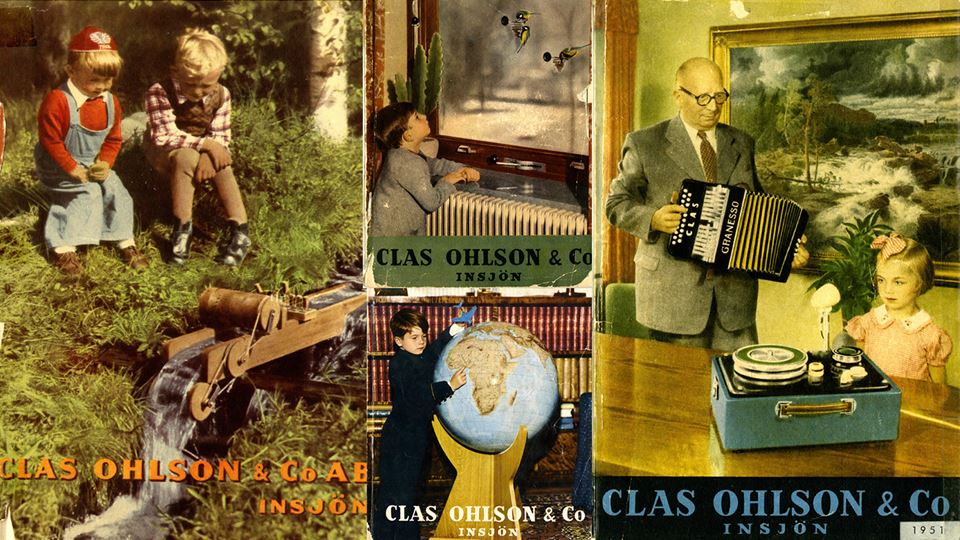 The first catalogue had covers drawn by Clas Ohlson’s brother-in-law, Eric Springfeldt. Eric was employed as an illustrator by the company and later in life would become a well-known advertising manager at the food retailer ICA. In Eric’s cover design, a best-selling item was often shown together with active people. Then, at the 1946 presentation of the catalogue, a hand-colored photo was used. The photo showed Clas Ohlson’s grandchild, and Mary Haid’s son, Toni Haid.

The picture shows Toni Haid playing by a creek with his cousin Hans Rolands. In the following years, all of Clas Ohlson's grandchildren would feature on the cover.

In 1950-1951, grandson Björn Haid takes a look at a bird-feeder (that Clas had designed himself).

On the 1951-1952-cover, it's Tore Ohlson's daughter Gunilla Tidstrand who listends to recorded tapes. Clas is included in the photo, playing an accordion that his friend Hagströmer of Älvdalen gave him.

Then in 1957-1958, it's time for Mady Haid's youngest son Peter to join the cover family. Peter points on Insjön on a globe with one hand, while letting the other explore Africa.

I felt the team spirit from start "I like that we’re not afraid to solve problems, whether it’s customers or colleagues who need help. Sometimes it’s even moving when customers are surprised to get help from us" - Jon Rissanen
Dustzero, a smart product to keep the dust away Henrik Falk started his own handicraft company when he was 18 years old. He began studying to be a tailor but continued to take odd jobs as a carpenter and builder – and soon this side-business did so well that he abandoned his tailoring plans.
Peter Olsson, Category Manager for Multimedia The purchasing process begins with monitoring the market. We need to understand today what will be in demand tomorrow.