About the board of Directors

The Board fulfils the independence requirement of the Code. All members, with the exception of Mathias Haid and Göran Sundström, are deemed independent in relation to the company, executive management and major shareholders.

Patrik Hofbauer and Mengmeng Du was elected to the Board of Directors at the 2020 AGM.

Immediately following the AGM, the statutory Board meeting is held, at which the rules of procedure for the Board and instructions to the company’s CEO are approved. The members of the Board’s Audit and Remuneration Committees and authorised signatories for the company are also appointed at this meeting. In addition to this meeting, the Board holds at least seven further meetings during the financial year. These are held quarterly in conjunction with the publication of the company’s financial reports and once in June prior to concluding the Annual Report, once in connection with the AGM and once during the autumn for strategic discussions. The strategy meeting usually takes place over two days, while other meetings are held on one day. The strategy meeting mainly discusses issues relating to the Group’s targets and strategies, product range, store establishment strategy, major investments and so forth. Other meetings primarily deal with the usual Board issues, the company’s reports and reporting by the Board committees. During 2020/2021, board meetings have been held digitally.

How the Board works

The rules of procedure for the Board of Directors stipulate which items on the agenda are to be fixed and which may vary. Each Board meeting is normally to be devoted to a specific topic so that the Board can gain more in-depth knowledge and understanding of the various parts of the company’s operations. There are also presentations on these topics by employees of the company.

The issues that the Board dealt with during the year included strategic direction, monitoring of the business plan, a review of risk management, significant business processes, development of current markets and expansion.

1 The trade-union organisations have had four representatives on the Board.

For further information on Board members, Board members, see this page. The work of the Board and its committees is described in more detail in Annual Report 2019/20 pages 47-55. 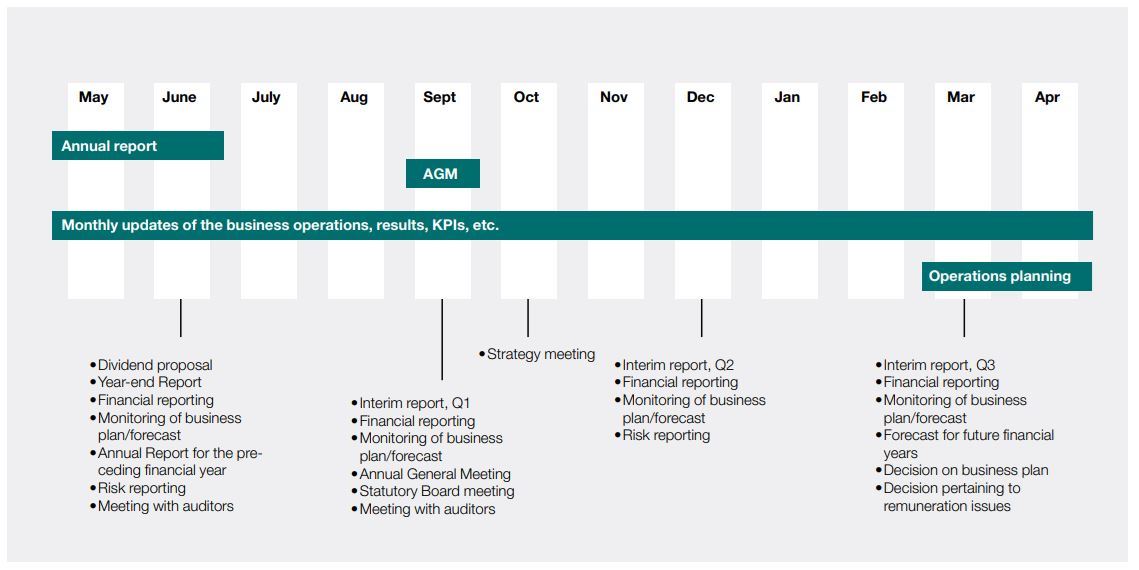 About the board of Directors
Board committees
Remuneration of the board Fees are paid to the members of the Board according to AGM resolutions.